Why Trends Matter (And Numbers Don't)

If you follow the news, the proposition that world is getting better would sound almost laughable. How could that even be? There are cases of horrific violence every day; climate change, already a terrifying problem, is getting aggravated by a rising middle-class; and, abject poverty is still widespread. The good news is our pessimism is unfounded. In nearly every metric of human betterment, we have made a remarkable progress over the last decades.

It’s true that situation has worsened (temporarily?) in some parts of the world—Syria, and Iraq, for instance, but the death toll from armed conflicts is still far below the levels in the 60s, 70s, 80s.

For instance, the 1980s saw an eight-year war between Iran and Iraq that killed more than half a million people and threatened to block the flow of oil from the Persian gulf, which would have brought the world economy to a standstill. A decade before, the Yom Kippur War killed 12,000 people (six time as many as died in Gaza in 2014), threatened the existence of nuclear-armed Israel, and led Richard Nixon to put American nuclear forces on a higher level of alert.

— Has the Decline of Violence Reversed since The Better Angels of Our Nature was Written?

If statistics prove that world is getting better, why do we find it hard to believe? 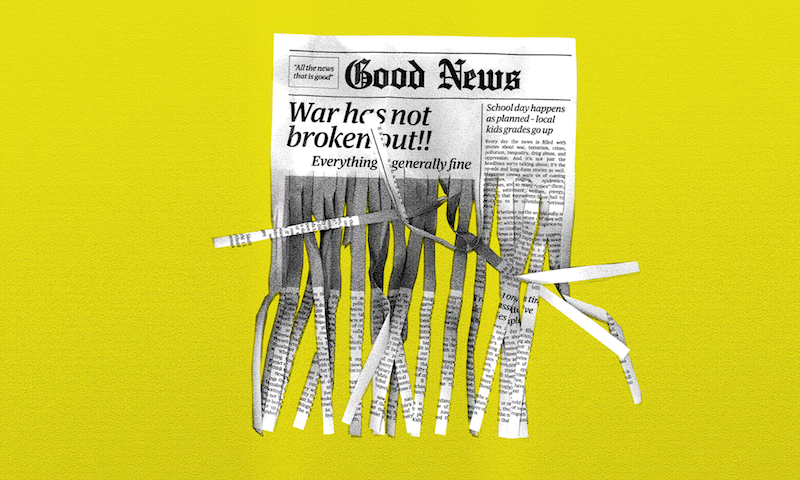 Our incredulity stems from a psychological bias called Availability heuristic: people estimate the probability of an event or the frequency of a kind of thing by the ease with which instances come to mind. Since we are constantly bombarded by negative news—of violence, rape, inequality, and oppression—we are likely to believe that world is in decline. We rarely get to see the irrefutable trends of human progress because positive news never makes up for a sellable story.

The bias affects us in hosts of other life scenarios, too. We are prone to judge a situation more harshly than it is in reality. We make judgments on the immediate developments, rather than the underlying trend. A textbook case of it can be seen in the stock market. Any bad news for a company is accompanied by selling pressure on the stock even when the implications on its long-term value might be scarce. Warren Buffet was smart enough to exploit this aspect of human behavior.

In a similar sense, we tend to gloss over the long-term view of our lives.

A sense of despair has often engulfed me when thinking about life in terms of disappointments—things that I haven’t done, interpersonal skills I still suck at. Social media only exacerbates the situation. Some of the stuff I feel bad about:

However, when compared to my past life, the situation looks far more bright.

“The goal is not to be better than the other man, but your previous self.”

It sounds like common wisdom, but the power of trends that it alludes to is rarely appreciated. There’s a simple—and beautiful—math behind it. A person with modest progress every year would inevitably outpace someone who had a huge head-start but stalled. And from anecdotal experience, there are more self-satisfied individuals than people who have a constant desire to improve.

Here’s an illuminating story of Pete Docter written in a letter to a teacher interested in passing some advice to her students.

CalArts only accepts 25 students a year, and it attracts some of the best artists in the country. Suddenly I went from being one of the top artists in my class to being one of the absolute worst. Looking at the talented folks around me, I knew there was no way I would make it as a professional. Everyone else drew way better than I did. And I assumed the people who were the best artists would become the top animators.

But I loved animation, so I kept doing it. I made tons of films. I did animation for my friends’ films. I animated scenes just for the fun of it. Most of my stuff was bad, but I had fun, and I tried everything I knew to get better.

Meanwhile, many of the people who could draw really well kind of rested around and didn’t do a whole lot. It made me angry, because if I had their talent, man, the things I would do with it!

Years later, a lot of those guys who probably still draw really well don’t actually work in animation at all. I don’t know what happened to them. As for me, I got hired at Pixar Animation Studios, where I got to work on Toy Story 1 and 2, direct Monsters, Inc., and Up (due out May 29th this year).

So, if you’re feeling dispirited because of a something recent, it’s likely that you’re undervaluing your future worth. Constant, small, (and, preferably, measurable) improvements will take you far; maybe not now, but certainly in the years to come.